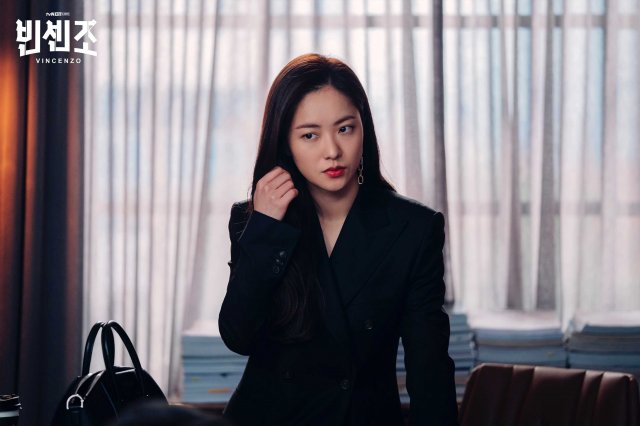 Despite appearing in the drama's official promotional poster, Jeon Yeo-bin has been a bit of a wild card for "Vincenzo" in terms of marketing. Her profile is lower than that of lead actor Song Joong-ki or even second lead Ok Taecyeon. To date, her only other leading role had been in the ensemble piece "Be Melodramatic" with other smaller credits including an appearance in "Save Me" of considerably less importance than that of Ok Taecyeon.

But Jeon Yeo-bin has already attracted much interest in "Vincenzo" because of the way her character typifies the drama's wildly contrasting tone. While "Vincenzo" opens up with mob lawyer Song Joong-ki engaging in brutal Italy based mafia action, the tone takes a turn for slapstick upon his arrival in Korea. There, Jeon Yeo-bin plays a prosecutor in a constant bickering relationship with her defense attorney father who constantly threatens to disown her.

Despite the extreme tonal jumps, Jeon Yeo-bin excellently captures abrupt humor shiftss between formal speech, deliberate trickery, and goofy physical comedy one after another. This has made her a remarkable foil for Song Joong-ki's serious straight man of an Italian mob lawyer who can't even relate to other legal professionals in the country of his birth. With an opening week rating high of 9.3% and a ninth place ranking in the international Netflix charts, "Vincenzo" is already starting with high intrigue.