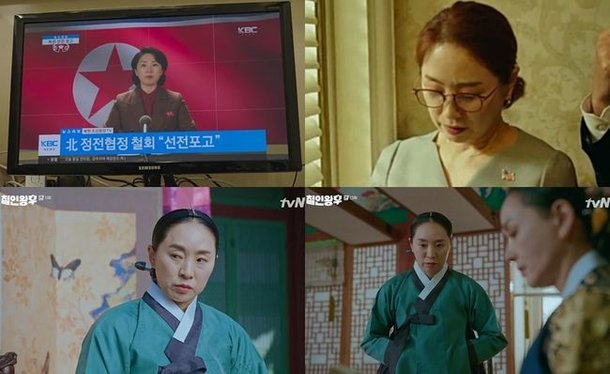 Jeon Young-mi has gotten attention recently with her appearance on "Mr. Queen" where she plays court lady Jeon, a character who delivers comic relief by explaining ridiculous situations in a serious way. Jeon Young-mi had previously been noticed for minor parts in "Steel Rain" and "Steel Rain 2: Summit" where she played similar roles in terms of a North Korean anchorwoman and an American translator. And now, her agency confirms that Jeon Young-mi will appear in the upcoming "Dark Hole" on OCN.

The move toward acting is significant for Jeon Young-mi, who works primarily as a comedian and radio DJ and whose roles in dramas and films are not generally well-publicized. While the "Steel Rain" role was generally just seen as a funny cameo for those who recognized her voice, Jeon Young-mi is increasingly gaining recognition for her peculiar form of verbal comic delivery, which actresses her age are often not known for. The exact nature of her role in "Dark Hole" has yet to be confirmed.