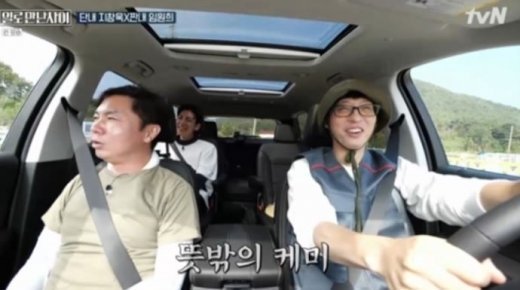 "Melting Me Softly" co-stars Ji Chang-wook and and Im Won-hee recently made an appearance on the variety show 'Laborhood on Hire'. The show stars comedian Yoo Jae-suk in the leading role as he takes celebrity guests to understaffed jobs and they all work together for the day getting the job done. In the latest edition the three actors worked at a sea salt farm.

Im Won-hee was apparently unprepared for the sheer difficulty of the work and had not been expecting to work all through the afternoon as well. He blew up at Ji Chang-wook, implying that Ji Chang-wook had convinced Im Won-hee to come with him on the program. Ji Chang-wook, having recently returned from mandatory military service, did not appear to find the sea salt farming to be quite so onerous.

However, for all their trials and tribulations, the three mostly took the day in stride, with Ji Chang-wook wondering what they would do if they were to weak to wake up the next morning. The boss of the sea salt farm expressed appreciation that the three had come down to show off just how difficult and labor intensive sea salt farming is. Ji Chang-wook said that though the work was difficult, he found the experience meaningful.

Each of the three actors was paid around one hundred dollars for their work that day, as is the standard rate for sea salt farming. Ji Chang-wook used his earnings to treat the staff of "Melting Me Softly" to lunch, while Im Won-hee treated his personal staff to beef ribs.