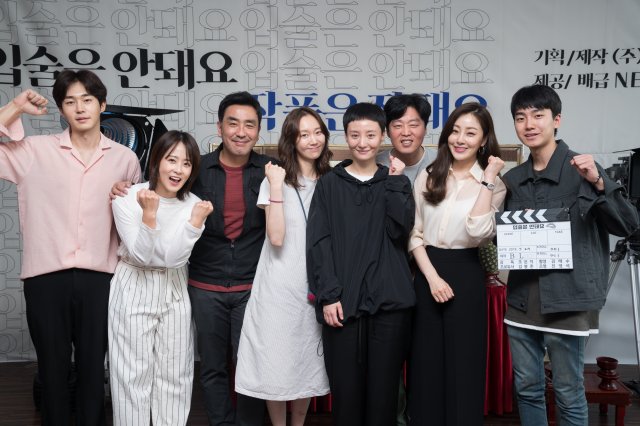 On June 4th "Not the Lips" began filming. The film is Jo Eun-ji's debut as a director. It stars Ryu Seung-ryong as a successful author in his late forties who is currently in a slump and Oh Na-ra as an aspiring author in her early forties.

Jo Eun-ji herself is, interestingly enough, only in her late thirties and is younger than either of her lead actors, though she has a lifetime of experience herself as a veteran actress. The cast is an eclectic mix of film professionals with very different backgrounds. Ryu Seung-ryong has been in action-oriented projects like "Kingdom" and "Extreme Job" while Oh Na-ra has been in more serious works like "My Mister" and "SKY Castle".

Other actors, such as Kim Hee-won, work more with doing small roles in a large variety of films. Sung Yoo-bin had to audition for his role out of two hundred applicants, though he too has long appeared in Korean films since he was ten years old, debuting in 2011's "Blind".

The project gained momentum at the 16th Mise en Scene Short Film Festival back in 2017, where Jo Eun-ji won a special prize for her short movie 'Two Days Three Nights'. Jo Eun-ji has expressed nervousness about starting her first feature film project, but has said that with the cast and crew she has she is confident she can do her best.

"[HanCinema's News] Jo Eun-ji's Debut Film as a Director, "Not the Lips" Begins Filming"
by HanCinema is licensed under a Creative Commons Attribution-Share Alike 3.0 Unported License.