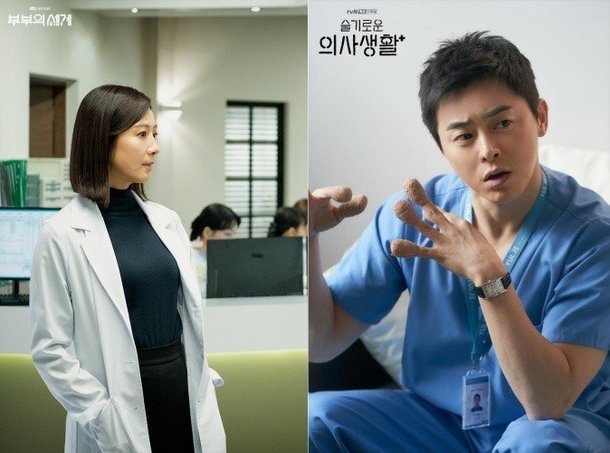 With the recent increased prominence of Kim Hee-ae's estimated appearance fee of a million dollars for "The World of the Married" attention has also turned to other major performers, raising the question of what kind of fee they can command. The estimated performance fee for Jo Jung-suk of "Hospital Playlist" has thus surprised many who see it as unexpectedly high.

Compared to Kim Hee-ae's estimated salary of $60,000-$70,000 per episode, Jo Jung-suk's estimated appearance fee is $90,000 to $120,000. Many have been surprised by the discrepancy, and wondered whether there is a gender element at work. After all, while Kim Hee-ae is the headliner for "The World of the Married", Jo Jung-suk is simply the lead for an ensemble cast in "Hospital Playlist".

But the production elements defy these obvious dynamics. "Hospital Playlist" was pitched in part as a spiritual successor to "Prison Playbook", from a creative team with a long history of strong hits. From the outset tvN was willing to spend a fair amount of money on the production and Jo Jung-suk's agent would have known this. "The World of the Married", by contrast, had low expectations, and was based off a British miniseries with little penetration in the South Korean market.

The two actors were also coming off at very different points in their career. "Exit - Movie" was among the highest performing movies in 2019 at the South Korean box office. "Moonlit Winter" with Kim Hee-ae, by contrast, did quite well for being an independent film, but was nowhere near as comparably present in popular South Korean movie culture.

Of course, confounding factors make it impossible to give any definite answer about why some actors make more money and actresses less. Age is probably a more relevant factor than gender in this case besides. A star like Jun Ji-hyun, for example, can easily command a six-figure price. And of course, money isn't everything. The lead role in "The World of the Married" is almost perfectly tailored to Kim Hee-ae's talent and brand, granting her sheer positive exposure that money alone can't buy.