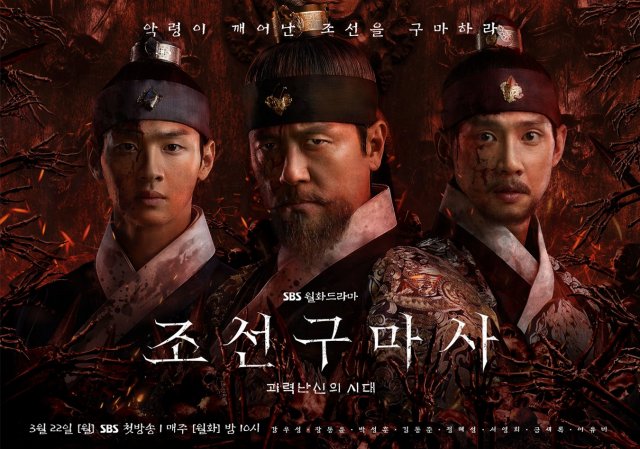 As "Joseon Exorcist" gears up for its release on March 22nd SBS has confirmed that the historical drama will premiere with a special seventy minute broadcast with the viewer recommendation rating set at eighteen or older. This news follows up on the recent outpouring of promotional material that "Joseon Exorcist" will be a brutal story, with scenes of often intense violence. The decision is on brand for SBS, which has seen a big success with the similarly age restricted "The Penthouse" series.

"Joseon Exorcist" is, as the title implies, a fantasy historical drama centering around exorcists. "Joseon Exorcist" is also expected to take on an epic scale, with the series showcasing famed historical drama actors Kam Woo-sung and Jang Dong-yoon in leading roles. The drama is also the latest from director Sin Kyeong-soo, who is best known for the similarly epic "Deep-rooted Tree" and "Six Flying Dragons" and most recently "The Nokdu Flower" from 2019.