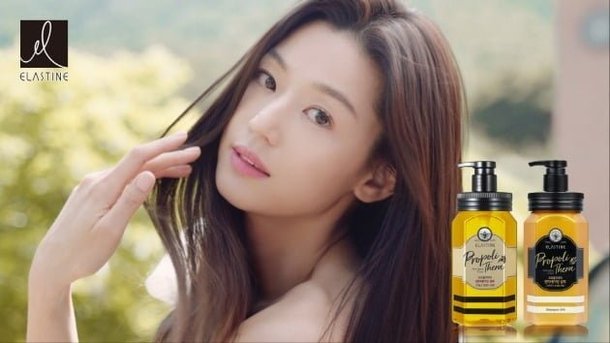 With Jun Ji-hyun's children getting older, and Song Hye-kyo's divorce fresh in the news, the former actress is making something of a comeback in cosmetics promotion. While Jun Ji-hyun has always had a strong profile as a brand promoter, lately she has not had as much exposure.

The timing may in part be coincidental, but Jun Ji-hyun has done impressive work as the model for LG's Elastine Propoli Thera line of shampoos. A representative for LG has said that Jun Ji-hyun is the ideal candidate to promote the product's anti-aging branding. Certainly, she is an actress whose appearance does not seem to have changed over recent years.

A representative for Amore Pacific, the parent company to MakeOn, has stated that they have received many queries regarding whether they were going to terminate Song Hye-kyo's contract. But the representative confirmed that they had no intention of changing a model's contract simply because she was getting divorced.

Certainly, Song Hye-kyo is continuing to work as normal, given her July 6th appearance at a cosmetics event in China, and her more recent cheerful personal statement on Instagram. A cosmetics industry professor at Sungsin University has said that it is unlikely that the divorce will ultimately affect Song Hye-kyo's brand very much, simply because her advertising identity had already been established over such a long period of time.