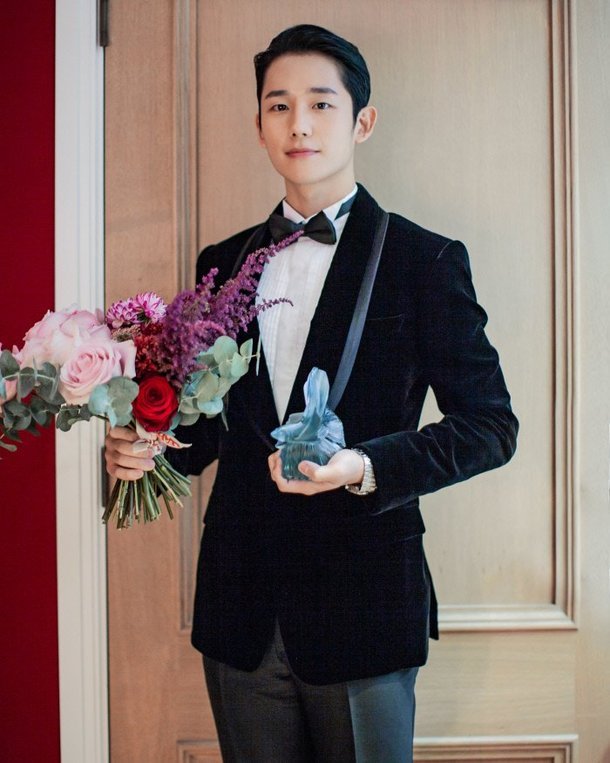 At the close of this year's London East Asia Film Festival Jung Hae-in was honored for his work on the movie "Tune in for Love" with the Most Popular Actor award at the closing gala. This wraps up an extended overseas trip for the actor, who has kept busy over the last couple of months since the ending of the popular drama "One Spring Night".

The award was voted on by various professionals in the British film industry, including programmers, producers, and critics. In "Tune in for Love" Jung Hae-in plays a man who keeps meeting a woman played by Kim Go-eun over time, usually through the coincidence of shared songs and radio frequencies.

In a statement Jung Hae-in expressed thanks to being chosen for this honor, and expressed joy at having had the chance to introduce South Korean films to a London audience. He also expressed thanks to his co-star, Kim Go-eun, the film's director, Jeong Ji-woo, the screenwriter, Lee Sook-yeon, as well as the rest of the movie's staff.

Now Jung Hae-in is looking ahead to his next drama projects. "A Piece of Your Mind" is a romantic project that will reunite Jung Hae-in with "Tune in for Love" screenwriter Lee Sook-yeon, while "Start-Up" is based on a webcomic. Details about both dramas remain scarce, possibly because Jung Hae-in has been too busy with international appearances to have done much collaboration work in the planning of them as of yet.