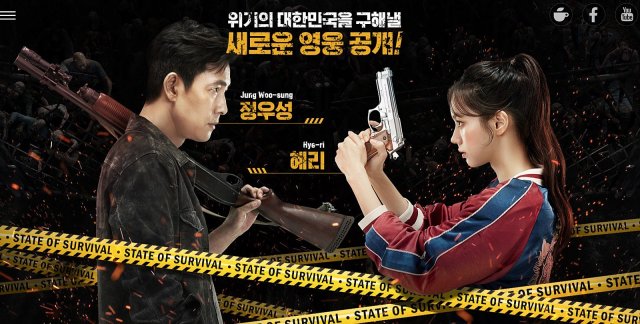 The new mobile game from King's Group, S.O.S State of Survival, recently announced that Jung Woo-sung and Hyeri would be working as advertising models for the tactical zombie survival game. In a statement, King's Group specifically cited Jung Woo-sung's justice-oriented role as the president in the recently released "Steel Rain 2: Summit" as being their motivation for selecting him. Hyeri's participation in the campaign was explained as stemming from her reputation for enthusiastic acting.

King's Group has been putting making-of videos starring Jung Woo-sung and Hyeri out on YouTube in anticipation of the game's official release. Jung Woo-sung has described the filming process as feeling quite fresh, as he has not had any previous zombie-related projects and is used to thinking of them only as they appear to movie spectators. S.O.S State of Survival is currently in pre-registration. It is the sequel to State of Survival, also produced by King's Group.