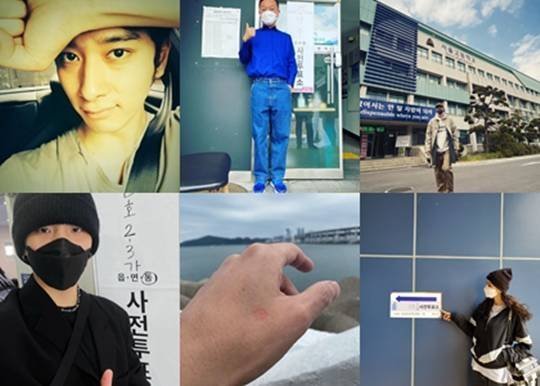 On April 10th early voting for the April 15th parliamentary elections in South Korea began. They will continue until April 11th at 3508 polling stations across the country. Voters were allowed to petition to vote early instead if they foresaw difficulties in attempting to get to the polls on April 15th. Evidently, Jung Woo-sung was one of them, as he proudly posted the voting proof stamp he earned on his hand on Instagram.

Many other celebrities made similar posts to the same effect. Kim Gyu-ri, Jo Kwon, Kim Jung-nan, Lee Da-hee, Lee Changmin and Lee Ki-woo were among the celebrities making posts on social media discussing why they voted and their commitment to democracy. Notably, many of them were wearing masks. While COVID-19 is on a downswing in South Korea, celebrities have made a point of emphasizing the safety of polling places in encouraging others to go out and vote.

None of the celebrities in question expressed any political statements that would give a hint as to who they voted for. Get out the vote efforts in South Korea have been largely abstract this year, focused on civic engagement and responsibility rather than partisan affiliations.

"[HanCinema's News] Jung Woo-sung and Other Celebrities Proudly Provide Proof That They Voted"
by HanCinema is licensed under a Creative Commons Attribution-Share Alike 3.0 Unported License.