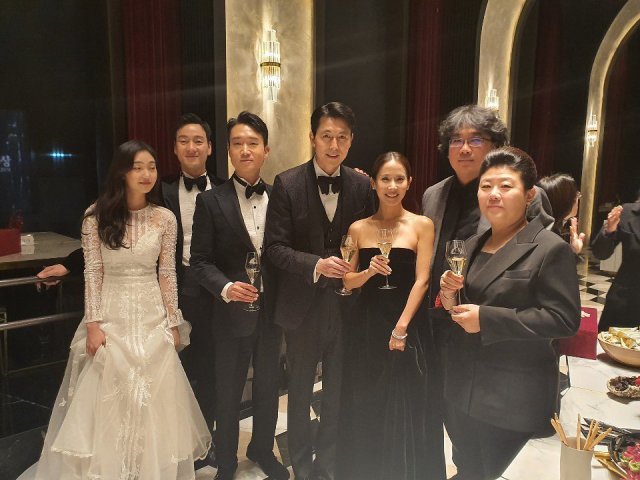 On November 22nd Jung Woo-sung posted a picture to his Instagram. The picture appears to have been taken at a reception event for the winners of the Blue Dragon Film Awards. It features the various winners of this year's awards, from director Bong Joon-ho to actresses Cho Yeo-jeong, Lee Jung-eun, and Kim Hye-joon. Actors Jo Woo-jin and Park Hae-soo also appear in the picture.

In the caption Jung Woo-sung thanks everyone and says that they are discussing their general joy. Jung Woo-sung's winning for "Innocent Witness" was a bit of a surprise, as the movie had otherwise been snubbed in the nomination process. Jung Woo-sung said in his expectance speech that he was not expecting his co-star, Kim Hyang-gi, to be present.

Kim Hyang-gi did appear at the ceremony, introducing the best supporting actress award. Jung Woo-sung called her his amazing partner in his acceptance speech. Though he mentioned attending many of these ceremonies in the past, this is Jung Woo-sung's first win for the best lead actor award at the Blue Dragon Film Awards. He has won popular star awards in the past.