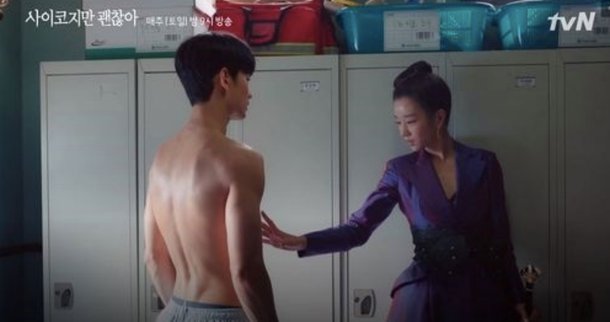 On August 26th the Korea Communication Standards Commission made an official statement regarding a long controversial scene in the drama "It's Okay to Not Be Okay" which ended last month. In the scene in question, the lead character played by Seo Ye-ji approaches the lead character played by Kim Soo-hyun in the men's dressing room of his workplace. She then makes sexually charged remarks to the shirtless man, while also making euphemistic references to his genitalia.

In the statement, while the KCSC acknowledged that the purpose of the scene was for character development and not mere titillation, they also described the season as lacking in emotional sensitivty, accusing the production team of not doing their due diligence in that regard. They also expressed disappointment that such content was deemed appropriate for timeslots when children might be watching.

Numerous violations of broadcasting code were cited regarding this scene as well. Some involved further innuendo on the part of Seo Ye-ji's character, although another sequence involving a character played by Kwak Dong-yeon streaking with his nudity covered up with a CGI elephant was also referenced. The statement from KCSC does not have regulatory force, and has been classified as an opinion. More broadly, it is a warning that legal sanctions are inevitable should such content persist.

"[HanCinema's News] KCSC Delivers Official Rebuke of "It's Okay to Not Be Okay" Sexual Harassment Scene"
by HanCinema is licensed under a Creative Commons Attribution-Share Alike 3.0 Unported License.