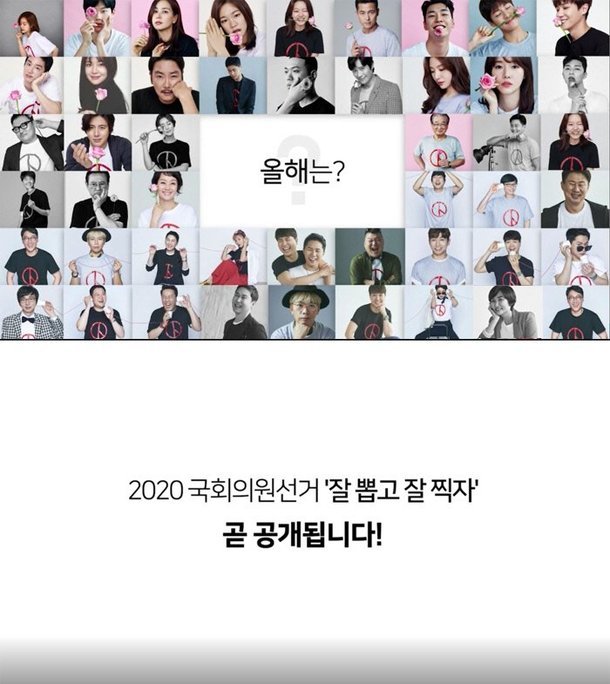 A large number of celebrities have lent their voices to a get out the vote campaign in anticipation of South Korea's parliamentary elections on April 15th. Kim Da-mi, Park Hae-jin, Jung Hae-in, Kim Gu-ra, Kim Sook, and others make up a thirty-nine person delegation encouraging people to choose their elected officials wisely for a more healthy Republic of Korea.

This is the third such get out the vote campaign in South Korea, following one for the presidential election of 2017 and another for the local government elections in 2018. Director Lee Ji-seon is coordinating the campaign, and has taken a break from doing commercial work for television variety shows for this express purpose. The campaign will largely take place on social media, with people rewarded with gift sets for engaging with it.

That the campaign is still going forward in spite of concerns regarding COVID-19 is somewhat surprising, given current calls to postpone presidential primary elections in the United States for safety reasons. However, the voting process is much more efficient in South Korea, reducing the risk of spreading the disease. Additionally, heightened vigilance regarding the disease's spread among the common population has resulted in an optimistic outlook for the country a month from now.

"[HanCinema's News] Kim Da-mi and Other Celebrities Promote Get Out the Vote Campaign"
by HanCinema is licensed under a Creative Commons Attribution-Share Alike 3.0 Unported License.