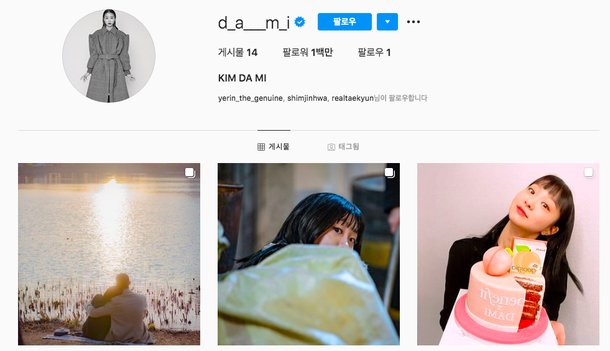 In just two months, actress Kim Da-mi has cracked the million follower milestone on Instagram. Kim Da-mi is believed to have accomplished this milestone thanks to her leading role on the recently concluded jTBC drama "Itaewon Class", which has greatly increased her popularity.

Kim Da-mi is an actress best known for her role on "The Witch : Part 1. The Subversion", where she played the leading role. Kim Da-mi earned this role through a highly competitive audition. Her only previous credit was on the relatively obscure movie "Marionette". Her role in "The Witch : Part 1. The Subversion" was highly lauded, earning her honors at the Fantasia International Film Festival, the Blue Dragon Awards, and the Grand Bell Awards.

In "Itaewon Class" Kim Da-mi was the leading lady alongside Park Seo-joon, as they worked together to try and build a successful restaurant in the highly competitive Itaewon district of Seoul. It ended with 16.5% ratings, the highest ever for a jTBC drama after "SKY Castle" from 2019.