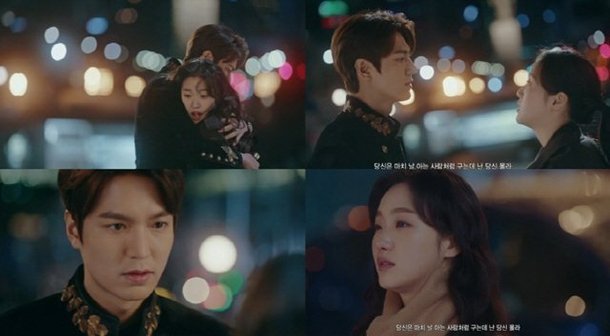 The drama deals with two parallel worlds, one similar to our own and one not so much, that are separated by a distinct door created by a demon. Lee Min-ho plays the role of the titular king who is charged with trying to protect the worlds. Other co-stars, most notably leading lady Kim Go-eun, are expected to play dual roles, as each character has an equivalent on the other side of the door.

The promotional elements showcase much of Kim Eun-sook's distinct style, with Lee Min-ho beckoning Kim Go-eun into a new world much as the drama itself is beckoning viewers to the same location. Other Kim Eun-sook projects from "Secret Garden" to "Goblin" have showcased the same sort of provoking curiousity about the setting, typically through the use of assertive characters to draw people into it.

"The King: Eternal Monarch" has been billed as a romance, but like other Kim Eun-sook joints, it's as likely to be a showcase for worldbuilding as it is for a love story. Indeed, Kim Eun-sook's last project, "Mr. Sunshine", de-emphasized the love story aspects as necessary in the service of its high concept plot.

The extent to which character interactions writ large will be a show point should also not be underestimated. Many Kim Eun-sook dramas, from "The Heirs" to "Goblin", greatly elevated the careers of their second leads due their ability to make strong use of roles that often had nearly equivalent screentime to the lead billed actors. Expectations run high there as well, with "The King: Eternal Monarch" being superstar Lee Min-ho's first leading role since finishing his mandatory military service.

"[HanCinema's News] Kim Eun-sook Comes Back With "The King: Eternal Monarch""
by HanCinema is licensed under a Creative Commons Attribution-Share Alike 3.0 Unported License.