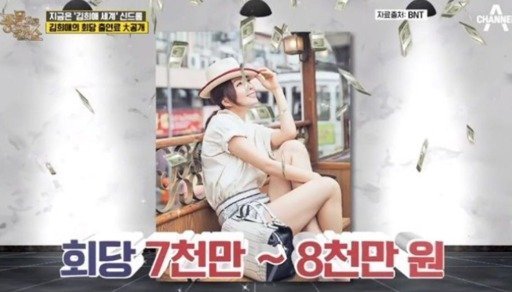 With "The World of the Married" coming into its final weeks and proving a smashing success many have speculated as to what lead actress Kim Hee-ae is being paid for her work on the project as its only major star. This matter was actually discussed late last month on the Channel A program 'Heard Through the Grapevine', where a reporter with sources inside the program was able to give a proper estimate.

According to the reporter in question, Kim Hee-ae's per-episode fee was roughly US$60,000, or somewhere in that close vicinity. Multiplied for sixteen planned episodes, this would place Kim Hee-ae's overall fee for "The World of the Married" at being around $1,000,000. Such an appearance fee is quite reasonable for an actress of Kim Hee-ae's stature, particularly as she is the only performer on the drama who could command a price that high.

However, in addition to her base fee Kim Hee-ae was almost certainly promised rebroadcast incentives and royalties. It is unknown how much revenue of this type was anticipated at the time the original contract was negotiated, but major stars tend to ask for higher royalties if they have a lower base fee. Consequently, Kim Hee-ae is likely to be making income from "The World of the Married" for some time to come.

"[HanCinema's News] Kim Hee-ae's Appearance Fee for "The World of the Married" Estimated at US$1,000,000"
by HanCinema is licensed under a Creative Commons Attribution-Share Alike 3.0 Unported License.