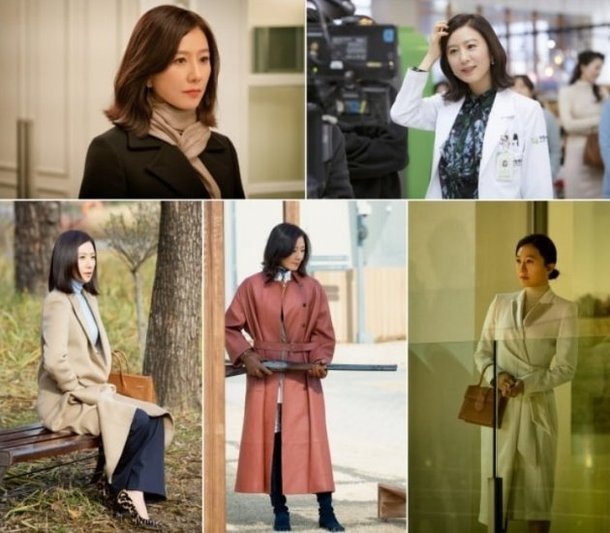 While dramas featuring older women in the leading role are nothing new, Kim Hee-ae has broken new ground as the lead character in "The World of the Married". The veteran actress has demonstrated impressive elegant style even as the text of the drama spotlights her character as a woman who has fallen victim to her cheating husband.

It's difficult to guess from her appearance in "The World of the Married" alone that Kim Hee-ae only just recently celebrated her fifty-third birthday. Kim Hee-ae expresses significant power in her role on the drama, whether she is acting in her professional capacity as a doctor or more directly in confrontations with her character's husband who is played by Park Hae-joon.

While Kim Hee-ae's own talents as an actress are not to be discounted, the wadrobe department for "The World of the Married" also deserves much credit. Part of what allows Kim Hee-ae to maintain such an impressive and fearsome visage is her expertly curated clothes. She favors long, loose coats which show off the shape of her body without being too exact on the proportions.

Kim Hee-ae's makeup is also similarly impressive. Her short hairstyle conveys authority at the expense of conventional attractiveness. Kim Hee-ae's clear unadorned face tends to draw attention away from it- but that's the whole point, as it allows her words and performance to hold viewer attention. The contrast with her co-star Han So-hee is noteworthy and deliberate. Han So-hee's make-up and wardrobe do the opposite, calling attention to her youthfulness rather than her wisdom.

"[HanCinema's News] Kim Hee-ae Shows Off Elegant Style in "The World of the Married""
by HanCinema is licensed under a Creative Commons Attribution-Share Alike 3.0 Unported License.