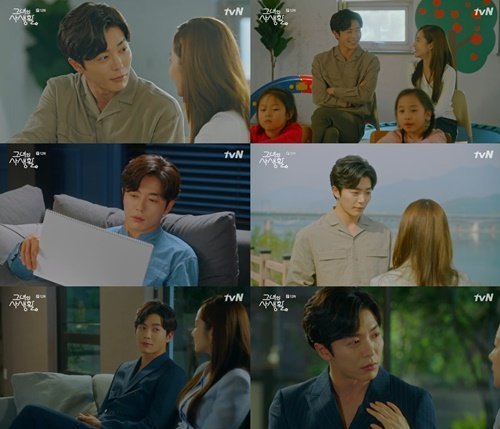 On the twelfth episode of "Her Private Life" Kim Jae-wook's character, Ryan Gold, started telling Deok-mi (played by Park Min-young) some of his hidden backstory. This marks what is likely the final cycle of Ryan Gold's character arc. From being aloof, to being highly romantic, Ryan Gold is now shown to have his personality swings in part due to melodramatic backstory.

The rapidity and curious plausibility of these changes are what's given Kim Jae-wook the reputation of being a one-man romantic comedy. Though the lead character, Kim Jae-wook is not playing the title character of "Her Private Life". Indeed, the premise of the drama seemed to suggest that Deok-mi's otaku double life would be more of a factor in the story.

The quivering of Kim Jae-wook's lips and the discomfort of his eyes are as pronounced in memory of trauma here as they were wielded in completely different purposes during the drama's more romantic portions. Just as Kim Jae-wook has been comic and sweet, now he is tender and sad.

"[HanCinema's News] Kim Jae-wook Transitions Once Again on "Her Private Life""
by HanCinema is licensed under a Creative Commons Attribution-Share Alike 3.0 Unported License.