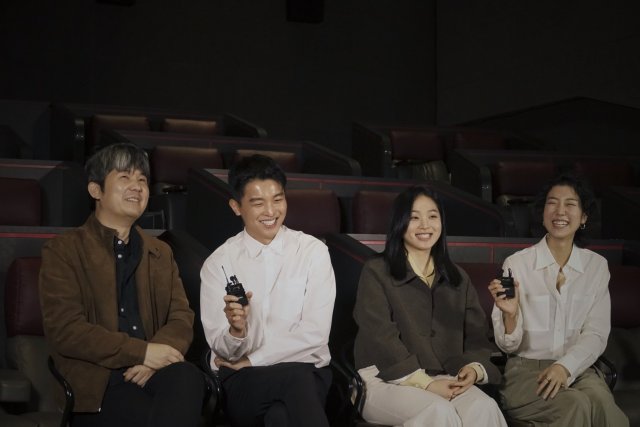 On March 17th at the Konkuk University Lotte Cinema in Seoul a press conference was held for "Shades of the Heart". In attendance were writer/director Kim Jong-kwan, actor Yeon Woo-jin, and actresses Yoon Hye-ri and Lee Ju-young. IU and Kim Sang-ho were not available due to other commitments. Nevertheless, Kim Jong-kwan emphasized their commitment, noting that "Shades of the Heart" was a story of changes from small meetings.

In the film, Yeon Woo-jin plays a man who engages in deep conversations with the other characters about their various life experiences. The approach in "Shades of the Heart" was described by Kim Jong-kwan as experimental, and inspired by his previous works. Kim Jong-kwan also stated that both the English and Korean titles of "Shades of the Heart" have special significance, the Korean title of the place of nobody referring to the emptiness that could also be the heart's shady area.

Shading is also important in terms of the cinematography, which Kim Jong-kwan attempted to use to convey the dark moods associated with such topics as old age and death. Nevertheless, the actual stories told tend to emphasize life. Even in the sad stories, there is meant to be a measure of hope, inspiring empathy in the viewer as well as Yeon Woo-jin as the perspective character.

"Shades of the Heart" was funded and produced in 2019 by the Jeonju Cinema Project before the COVID-10 pandemic hit. Nevertheless, Kim Jong-kwan stated that he felt the themes of the movie were appropriate to the new age in which we now live. "Shades of the Heart" will be released in South Korean theaters on March 31st.

"[HanCinema's News] Kim Jong-kwan's "Shades of the Heart""
by HanCinema is licensed under a Creative Commons Attribution-Share Alike 3.0 Unported License.