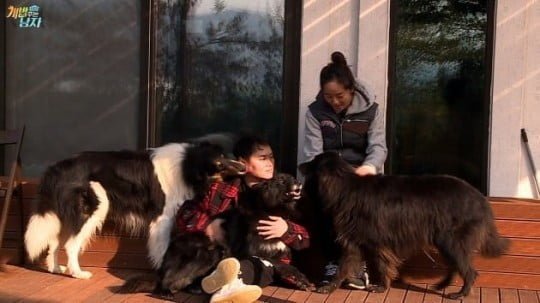 Following reports from an anonymous neighbor that Kim Min-kyo's dogs attacked an elderly neighborhood woman, Kim Min-kyo has come out with a full acknowledgment and apology for the event in question. The incident occurred on May 4th and was witnessed by the anonymous neighbor who was harvesting vegetables.

In a statement released on social media, Kim Min-kyo explained that the dogs had been excited by the appearance of a large wild animal in the mountains and leapt over a fence escaping their enclosure. The attack occurred while Kim Min-kyo's wife was looking for them. She was able to accompany the victim, who is in her eighties, in the ambulance to the hospital.

Kim Min-kyo was away from home at the time, but went to the hospital as soon as he heard the news and apologized along with his wife. Kim Min-kyo claimed that the elderly woman was a friend, and that her family was also apologetic. Purportedly they were concerned about the damage the incident could do to Kim Min-kyo's reputation.

This reaction was confirmed by the daughter of the victim, who claims that Kim Min-kyo and his wife did all they reasonably could. Kim Min-kyo also promised to pay for all medical expenses incurred by the attack.

"[HanCinema's News] Kim Min-kyo Apologizes for Incident Where his Dogs Attacked An Elderly Woman"
by HanCinema is licensed under a Creative Commons Attribution-Share Alike 3.0 Unported License.