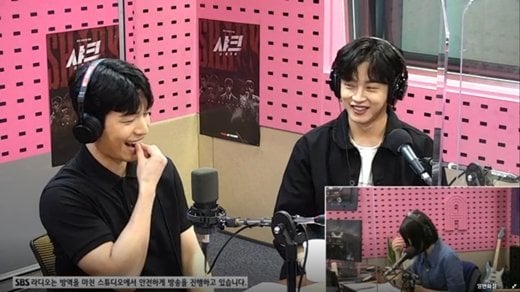 On June 9th the leading stars of the upcoming TVING film "Shark: The Beginning" appeared on the SBS Radio program Park Ha-sun's Cinetown to discuss their work. Kim Min-seok claimed to have received a powerful endorsement of the program from his friend Lee David. When Kim Min-seok asked Lee David how the interview was, Lee David responded by saying that Park Ha-sun was pretty. Park Ha-sun was impressed by the manners in this introduction.

The conversation naturally drifted to actresses in general. As it happens Wi Ha-joon himself has some familiarity with more experienced female performers. He admitted to having to endure jealous irritation from his friends as he got to play the younger brother of Son Ye-jin in the drama "Pretty Sister Who Buys Me Food" a few years back. He considers himself very fortunate to have had the opportunities he has had in his career.

Another topic of discussion was how Kim Min-seok had a brief moment of celebrity last year during his mandatory military service when he helped to apprehend a person who had been seen taking lewd photos without consent. Kim Min-seok was bashful on the topic, and said he felt that the suspect would have been caught without his assistance anyway. He said that, unlike what is commonly assumed, he did not actually chase the man down.

In "Shark: The Beginning" Kim Min-seok plays the victim of a very different kind of social crime, namely school violence. After being wrongly placed in prison, Kim Min-seok meets an MMA champion played by Wi Ha-joon and starts breaking his own limits. Kim Min-seok claimed that the filming itself didn't take long, and that most of the work was just practicing for the fight scenes. Wi Ha-joon expressed particular enthusiasm for this part of the job, as he's been a lifelong practitioner of boxing and acrobatics.

Kim Min-seok said that the action was especially intense, and that the movie's martial arts director insisted on cutting training so close that inevitably he would actually get hurt. Kim Min-seok claimed that one winter day he got hurt bad enough the next day he had to go the emergency room. They also discussed intense dieting requirements. "Shark: The Beginning" will premiere on TVING this coming June 17th.