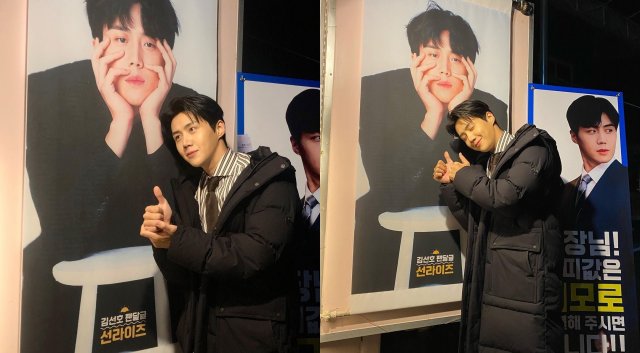 On November 6th Kim Seon-ho made a post to his Instagram account acknowledging the receipt of a coffee car. In the pictures he is seen standing next to a couple of large placards of himself. Unfortunately most of the text on the banners is obscured, although the word sunrise written in Korean can be clearly made out.

Kim Seon-ho has rapidly gained increased recognition due to his role as the second lead in "Start Up" which is currently airing on tvN. Though a downgrade from last year's "Catch the Ghost" where he played a leading role, Kim Seon-ho's role in "Start Up" has done much to stoke the interest of fans. Kim Seon-ho also recently confirmed his next acting project, the stage play Ice, which has also cast Jung Woong-in, Lee Chul-min, Park Ho-san, and Shin Sung-min.