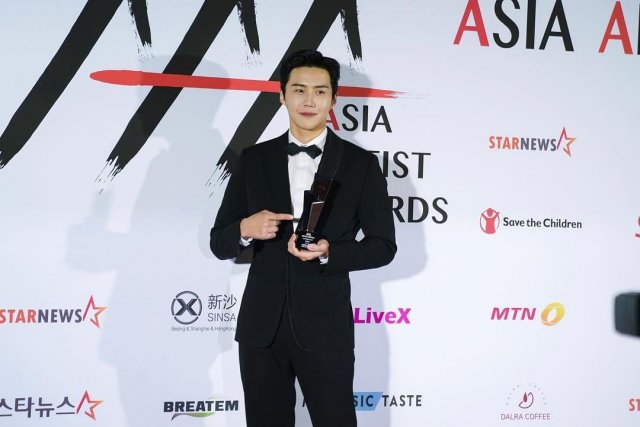 On November 29th actor Kim Seon-ho sent a message out on Instagram in regards to his recent win at the Asia Artist Awards which were broadcast on November 28th. Kim Seon-ho was honored that night with the award for Best Emotive Actor, an honor which he shared with Ahn Bo-hyun. In the Instagram post, Kim Seon-ho said that he was having a great time since having won. He thanked his supporters for the honor, crediting them with the victory.

The post was a follow-up to Kim Seon-ho's acceptance speech the previous night. While that speech also credited the support of his fans, they were only at the end of a much longer that also included those who allowed him to join the cast of "Start Up". Kim Seon-ho also thanked his parents, his company family (presumably his agency), and the variety show 2 Days & 1 Night which he currently stars in. "Start Up" had ratings of 5.25% in its fourteenth episode.

"[HanCinema's News] Kim Seon-ho Thanks "Start Up" and Fans for AAA Win"
by HanCinema is licensed under a Creative Commons Attribution-Share Alike 3.0 Unported License.