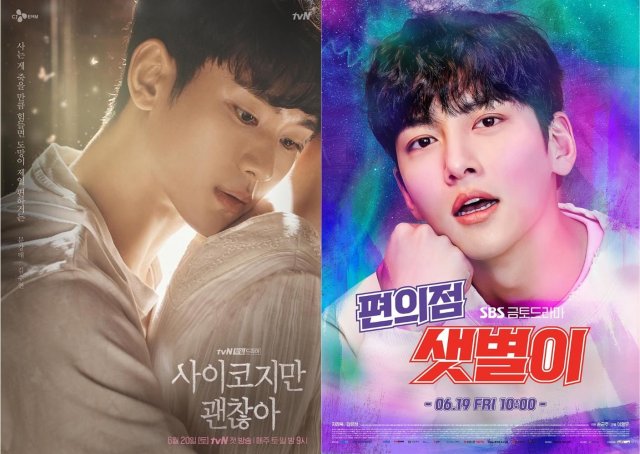 As the domestic drama market has quieted down with the end of hits like "The World of the Married" and "Hospital Playlist" there has been quiet and doubt regarding the importance of major names. Lee Min-ho, after all, was not enough to turn "The King: Eternal Monarch" into the megahit that was expected. But with Kim Soo-hyun and Ji Chang-wook starting new dramas this weekend, big stars are getting another chance to prove their worth.

Kim Soo-hyun in particular is in an odd spot. His last major appearance was in the disastrously received noir film "Real" where he played himself and his own duplicate at a mysterious casino. Kim Soo-hyun has only gradually opened up to new dramas, being warmly received for brief appearances in "Hotel Del Luna" and "Crash Landing on You". He now appears on Saturday in tvN's new drama "It's Okay to Not Be Okay", which is heavily counting on his popularity and influence.

He and co-star Seo Yeo-ji would seem to be in a good position in that regard under director Park Shin-woo who directed "Encounter". But then, Park Shin-woo also directed "Hyde, Jekyll and I", a definite low point for leading man Hyun Bin, although he did manage to recover from it. Ultimately "It's Okay to Not Be Okay" will be relying heavily on the chemistry of its leads, with its premise of an oddly paired male caregiver and mentally ill writer not being that distinctive on its own.

"Backstreet Rookie" with Ji Chang-wook will take a decidedly more risky approach this same weekend, premiering on Friday in multiple markets and featuring its leads in external comedic conflict rather than internal emotional conflict. With both dramas a notable departure from the high concept fantasy worldbuilding of "The King: Eternal Monarch", the South Korean drama market seems poised to get a clear answer as to whether big name actors are really as big headliners as assumed.