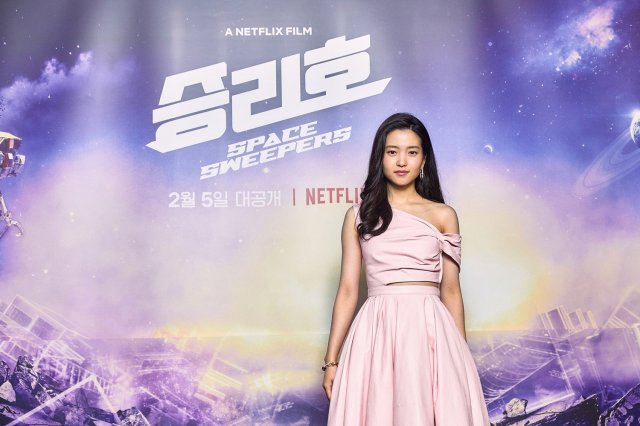 On February 2nd Netflix held an online press conference for "Space Sweepers". Actors Song Joong-ki, Kim Tae-ri, Jin Seon-kyu, and Yoo Hae-jin were all in attendance. Director Jo Sung-hee was also present. The science fiction project has been a particular spot of interest for Kim Tae-ri, marking a transition to a more professional, adult kind of character for her.

Perhaps best known for her roles in the Park Chan-wook helmed internationally lauded film "The Handmaiden" and the more conventionally successful Occupation-era drama "Mr. Sunshine", in "Space Sweepers" Kim Tae-ri plays the role of Captain Jang. Her spaceship, which collects junk in space, is beset by pirates. This is Kim Tae-ri's own description of the action, suggesting a more intense role from the actress's point of view than what has been promoted so far.

Kim Tae-ri claimed to have no similarities with her character. According to Kim Tae-ri, Captain Jang always has the situation under control and exudes powerful charisma, commentary suggesting the actress has a surprisingly low opinion of her own talents. Kim Tae-ri also described the yelling scenes as intense. Kim Tae-ri said that she had to learn a lot of what to do from similar Hollywood genre films, noting that she was not used to the work required.

Kim Tae-ri hoped that the production behind "Space Sweepers" put a noteworthy Korean mark on the genre. Kim Tae-ri was also hopeful to appear in another science fiction project, but noted that nothing is known about its status, suggesting that investors may be waiting to see how "Space Sweepers" does first. "Space Sweepers" will be released worldwide on Netflix on February 5th.