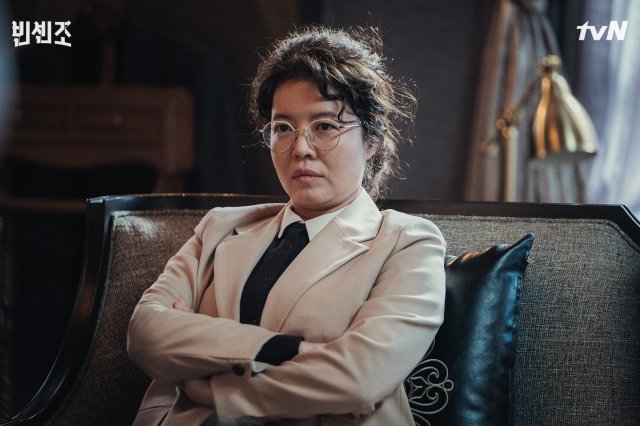 As "Vincenzo" has moved into the courtroom battle aspect of the story, actress Kim Yeo-jin has come into prominence as the drama's preeminent villain. As the opposing attorney, she is the chief obstacle preventing the characters played by Song Joong-ki and Jeon Yeo-bin from achieving their goals. But tonally, Kim Yeo-jin is also a noteworthy divergence in that she does not participate in the goofy antics that the other characters do, and is in private moments seen raging about them.

It's the best role in years for Kim Yeo-jin, with her villainous character being listed as major supporting cast rather than minor supporting cast. Some of Kim Yeo-jin's better known roles in recent years have been as the parent of a major character. These include "My Strange Hero", "Rookie Historian Goo Hae-ryung", "Itaewon Class", and "Meow, the Secret Boy". But in "Vincenzo" Kim Yeo-jin drives the action rather than react to it.

Kim Yeo-jin also shows genuine menace in her role as a lawyer, with the most recent episode of "Vincenzo" having her organize an elaborate frame-up. This dirty trick is a far more brutal echo of the pranks which opened up the sixth episode, prompted by the main characters to force a legal delay. "Vincenzo" airs on Friday and Saturday nights and had ratings of 11%, a new record for the drama.