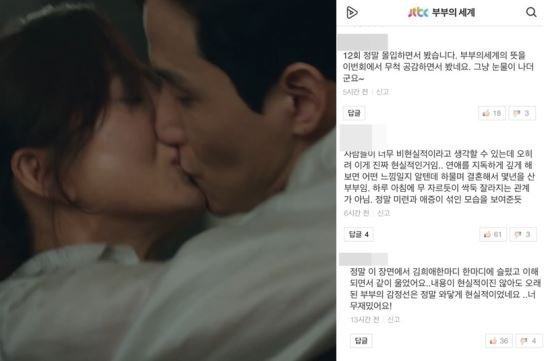 As part of its latest record-breaking episode, "The World of the Married" featured a scene where in the lead characters played by Kim Hee-ae and Park Hae-joon engage in a highly passionate kiss. The scene was highly counterintuitive, as much of the drama's story involves their characters betraying and declaring vengeance on one another. It also struck a strong chord with viewers, with some claiming to have been brought to tears by the moment.

Other commenters on jTBC's website found the moment shockingly relatable. While "The World of the Married" has many of the same trappings as a stereotypical revenge drama, viewers have long been impressed by the drama's characterization. Commenters observed, seemingly speaking from personal experience, that being married for a long time permanently alters a couple's relation to one another and that such powerful emotions can't be completely effaced by divorce.

Over three thousand comments over twelve million views of the kiss clip posted on May 4th delve into heated discussion over the realism present in the emotional performances in the drama. Even many claiming to have found the scene unrealistic were impressed by the sincere passion exhibited by the performers. "The World of the Married" airs on Friday and Saturday nights, with four episodes of sixteen yet to broadcast.

"[HanCinema's News] Kiss Scene in "The World of the Married" Provokes Powerful Reaction From Viewers"
by HanCinema is licensed under a Creative Commons Attribution-Share Alike 3.0 Unported License.