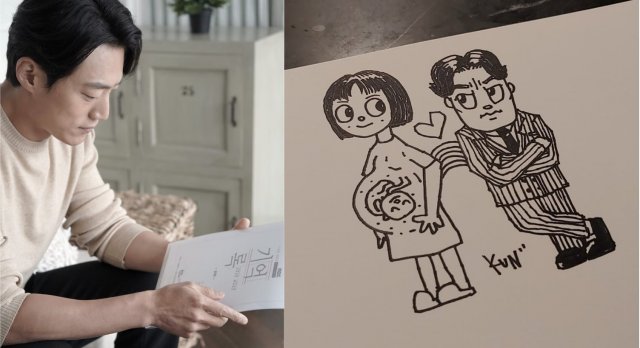 Actor Lee Hee-joon recently made an Instagram post of an unusual drawing he's had for some time. In the drawing, a caricature of Lee Hee-joon and his wife, model Lee Hye Jung, appear.

She has a short haircut, which she is not known for, and is pregnant with a visible fetus. She is connected to a somewhat cross-looking Lee Hee-joon through a rainbow with a little heart over it.

The drawing appears to date to sometime late last year. Lee Hee-joon and his wife announced the birth of their son back in December. Lee Hee-joon recently appeared in the spy thriller "The Man Standing Next" and is cast for "Bogota", but filming for the Colombia based drama has been indefinitely put on hold due to COVID-19 related travel restrictions.