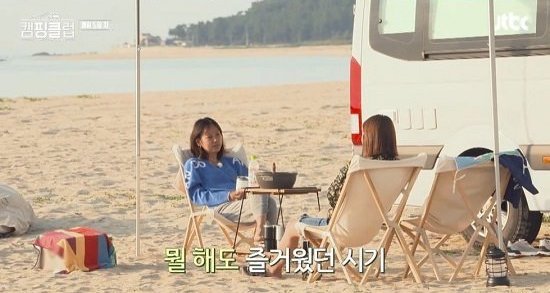 On the jTBC variety show 'Camping Club' former members of the girl group Fin.K.L dish about their lives as now older married women in the context of camping trips. A frank husband discussion on the August 11th broadcast between Lee Jin and Lee Hyori has caught a lot of attention in that regard.

On the show Lee Jin dished about her life as a newlywed in the United States. She complained about how when her husband went to work she was left alone with nothing to do. She felt like a baby in these circumstances, where even a phone call proved to be a very enlivening surprise - not something Lee Jin believes anymore.

Lee Hyori thought the anecdote was cute. She also commiserated about going to live overseas without having any experience doing so or even knowing English. Lee Hyori thought such a decision would be difficult to make, but suggested that love without a willingness to sacrifice isn't love at all.

Lee Jin agreed, going on to say that the first six months went on like normal, and it was only a call from her family that made her realize just how serious the decision had been. Up until that point Lee Jin had the feeling like this was just a trip. Lee Jin also confirmed that for her apparent helplessness she did not want to start working.

Lee Jin explained that the reason for this was that her final drama, "Shining Romance", had been exceptionally difficult. It was her first lead role, and the drama was a daily one. So she would come home every day and cry. The problem wasn't just the work, but also her getting into the melodramatic nature of her character and the story, such that she would start envying random people on the street.

This frame of mind of wanting rest was where Lee Jin was when she met her husband. Lee Jin also mentioned, with some irony, that when she tries to actually watch "Shining Romance" now only happy memories related to the shooting appear in her mind.