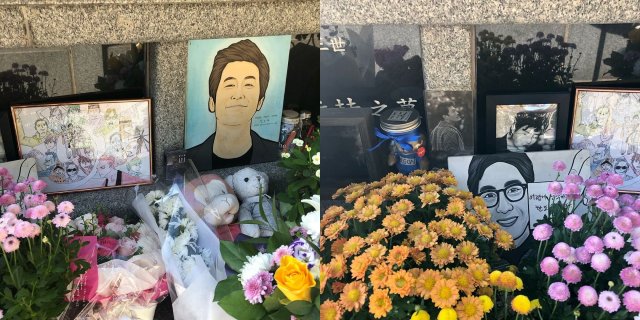 On October 30th "Graceful Family" star Lee Kyu-han made an Instagram post regarding departed actor Kim Joo-hyuk. The post simply reads, "I have come, brother", and is accompanied by a picture of Kim Joo-hyuk's memorial site, which appears to have been decorated by other visitors in memoriam as well.

Kim Joo-hyuk died in a car accident exactly two years ago to that day. Technically he was still alive when brought to a nearby hospital, but doctors were unable to save his life. A heart attack was suspected as the cause of death, but an investigation ruled that the likelihood of such an event was low. An exact cause of death was never determined.

"[HanCinema's News] Lee Kyu-han Visits the Grave of Kim Joo-hyuk on Second Anniversary of his Death"
by HanCinema is licensed under a Creative Commons Attribution-Share Alike 3.0 Unported License.