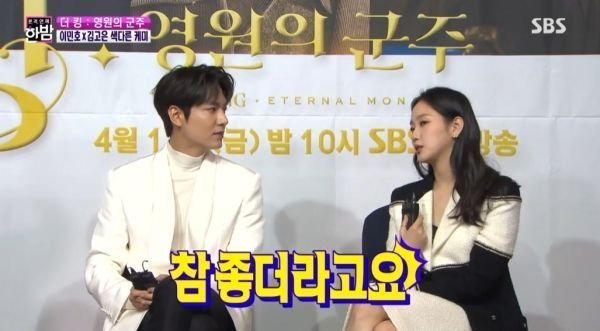 The South Korean entertainment news program 'Access Showbiz Tonight' recently aired an interview featuring the stars of "The King: Eternal Monarch", Lee Min-ho and Kim Go-eun. "The King: Eternal Monarch" is a fantasy drama starring Lee Min-ho in his comeback role after mandatory military service. He plays the titular king, a mathematical genius who enters into this world's South Korea through a wormhole.

According to Lee Min-ho his main preparation for the role was to study courtly procedures and also conduct horseback riding practice. The reasoning behind this was to make his character seem less like an emperor and more like someone brought up in a specific set of circumstances, with specific ideas about the world. Lee Min-ho confirmed upon questioning that this was mostly a question of attitude.

Lee Min-ho also had kind words for his horse, Maximus. Lee Min-ho described Maximus as being extremely cute, with a nose that turns red in cold weather. Lee Min-ho also said that after shooting scenes he would regularly share his candy with Maximus. This statement inadvertently directly confirms that Lee Min-ho likes to bring candy to shooting locations.

For Kim Go-eun's part, she described a strong affinity for handcuffs. Kim Go-eun's character on "The King: Eternal Monarch" is a police officer, and is always chasing people. So Kim Go-eun finds actually fastening the handcuffs to be very satisfying, as well as an opportunity to look cool. Kim Go-eun also described being impressed by Lee Min-ho upon first meeting him, and they quickly fell to talking. Lee Min-ho claimed that Kim Go-eun is the active actress today he most wanted to work with.