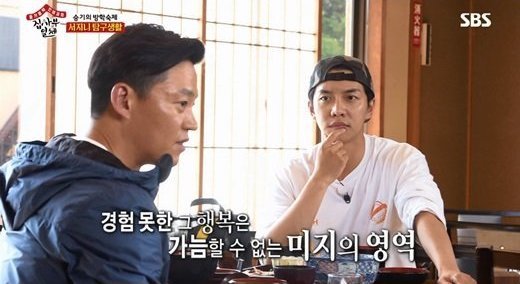 On June 9th Lee Seung-gi and Lee Seo-jin discussed relationships on the SBS variety show 'Master in the House'. The conversation was prompted by Lee Seo-jin's plans to soon go to the Aomori prefecture in Japan. Lee Seo-jin looked out the window and talked about how love was only for three months, and about how it was better to pass life by as friends as the other housemates laughed.

Lee Seung-gi responded with envy that Lee Seo-jin could live his life like that without inspiring hate. Lee Seo-jin responded by saying that he did indeed receive hate for this attitude, but that it was too exhausting to have people like him all the time. He said it was less stressful for him to just recover from the dislike.

Lee Seo-jin went on to say that Lee Seung-gi was much more well-rounded than he was, and that their outlooks on these kinds of matters were quite different. Lee Seo-jin confessed that he was jealous of people who could better express themselves like that.

When Lee Seung-gi asked Lee Seo-jin what he thought about marriage the older man replied that he didn't think about it, but that this didn't mean he wasn't going to do it. Lee Seo-jin said that, while children might bring him happiness he hadn't known in life so far, at the same time he was skeptical that such an unexpressive man as himself would be a good father.