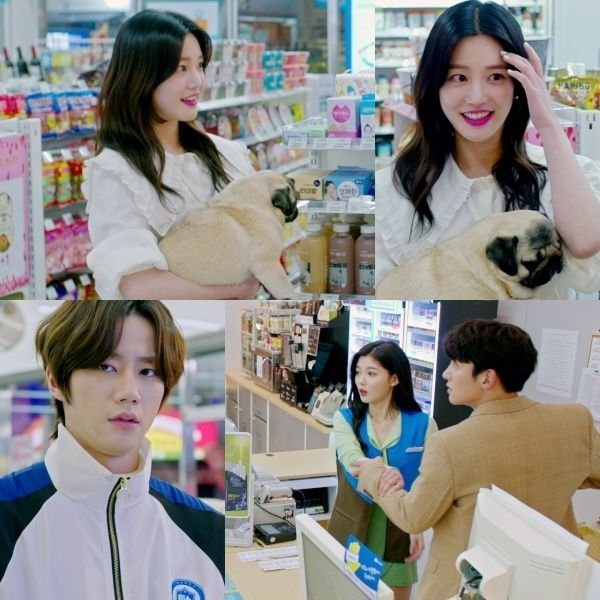 Lee Yoo-bi and Lee Jun-young had noteworthy turns as guest stars in the second episode of "Backstreet Rookie", briefly appearing as guests in the convenience store where the drama takes place. This is the first appearance of Lee Yoo-bi in a drama since "A Poem a Day" in 2018, and the first for Lee Jun-young after "Good Casting", which finished airing earlier in the week.

Lee Yoo-bi took on a role that's been listed simply as 'Dog Mom'. She plays a woman who is very affectionate with her dog, and also has a somewhat flirtatious encounter with the lead character, the hapless convenience store manager who is played by Ji Chang-wook. Lee Yoo-bi was noticed by viewers as looking quite cute alongside her dog, an image she has also shown in the past via variety shows.

Lee Jun-young, by contrast, played a high school student who was trying to buy cigarettes. This related to an ongoing plotline where Ji Chang-wook's character is attempting to deal with a police investigation regarding the sale of illicit materials to minors at the convenience store. This made him somewhat more relevant to the ongoing plot compared to Lee Yoo-bi's character.

In general the convenience store format of "Backstreet Rookie" makes it quite easy for guest stars to feature on the program. Jung Eun-ji has played a woman who humiliated Ji Chang-wook's character in front of his girlfriend, while Park Jin-joo and Kim Yoo-jung featured as school girls in a parody of "Sunny - 2010" which they starred in. With even Ko Kyu-pil making an appearance as a tipmonger, there's no telling how many guest stars the drama may have.