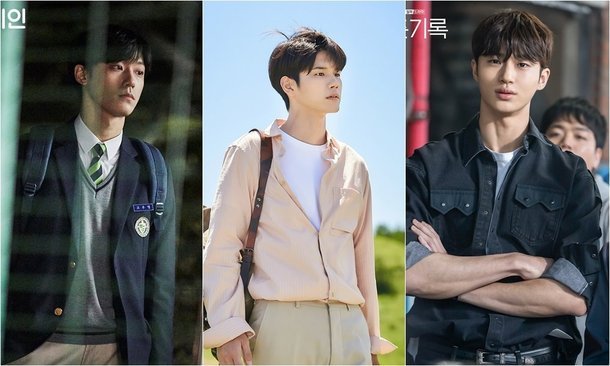 The current season of South Korean television dramas has had a noteworthy casting trend away from established male performers to younger ones with less of a record. Lee Do-hyun of "18 Again", Ong Seong-wu of "More Than Friends", and Byeon Woo-seok of "Record of Youth" all stand out as new faces with quite a bit of screentime in their respective dramas. This, even when they're cast alongside bigger stars.

With "18 Again" this is baked into the premise, as Lee Do-hyun plays the eighteen year old version of the actual lead played by Yoon Sang-hyun. Undoubtedly, Lee Do-hyun's role is the more difficult of the two, as he's playing a grown man over twice his age in a younger man's body. With Kim Ha-neul as the other lead, "18 Again" has shown tepid improvement in ratings with its first episode at 1.8% and its most recent fourth episode at 2.5%.

"More Than Friends" lacks as much reason for optimism to date. The jTBC drama starring Ong Seong-wu had the leading actor's only credit to date being in "A Moment at Eighteen" from 2019. His co-star Shin Ye-eun is a similar newcomer, best known for the "A-TEEN" webdramas but not so successful in her other leading roles. In its first week "More Than Friends" recorded ratings between 1.4% to 1.5%.

Byeon Woo-seok has shown the most promise as new performer in "Record of Youth" though he has the benefit of Park Bo-gum and Park So-dam as co-stars. Nevertheless, the drama has shown decent ratings ranging from 6.3% to 7.8% and his work has received consistent praise. Lee Do-hyun's acting, by contrast, has been generally well-liked while Ong Seong-wu's been the target of criticism for weak no dialog scenes- a major problem for a drama centered around miscommunication.

Despite mixed results to date the trend shows no signs of abating. "Do Do Sol Sol La La Sol" begins on October 7th and stars Lee Jae-wook of "Extraordinary You" fame in a new leading role for a drama that's hoping for more mainstream success. With many established actors shying away from romantically themed dramas, and drama ratings being low in general, a real opportunity has appeared for new actors, though so far none have been able to take the chance to break into stardom.