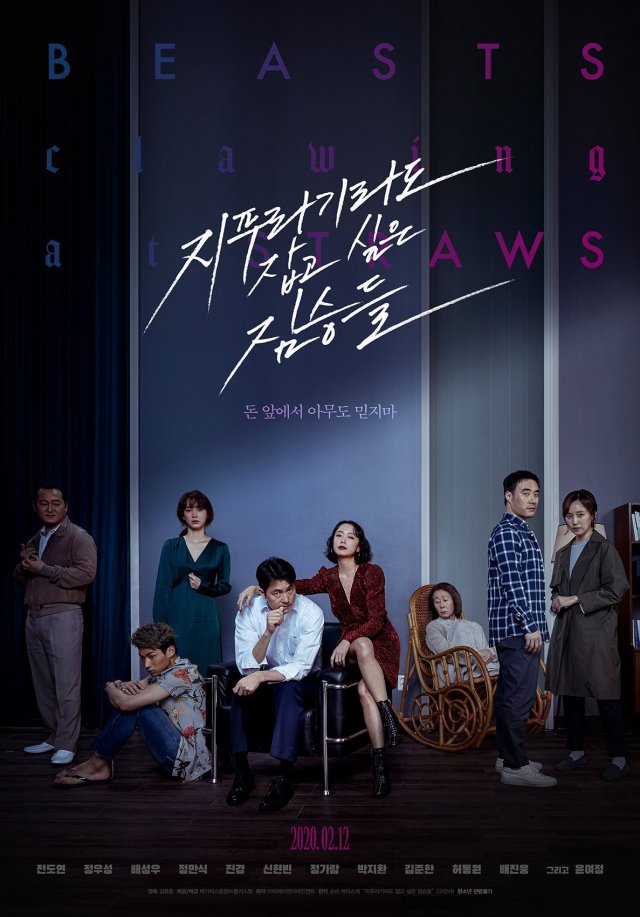 "Beasts Clawing at Straws" has released its main theatrical poster as the movie transitions to its final marketing push over the Lunar New Year's holiday.

While "Beasts Clawing at Straws" will release a few weeks later, on February 12th, Lunar New Year weekend will be the movie's main chance for the offbeat noir thriller to make a positive impression on filmgoing audiences during the holiday rush.

While Jeon Do-yeon and Jung Woo-sung have been the main focal points of promotion, making comments and doing press tours, the main theatrical poster echoes previous ones in that it emphasizes how the film is an ensemble piece. While Jeon Do-yeon and Jung Woo-sung are in the central slot and have top billing, seven other highly recognizable actors also appear on the poster and are listed by name. They also have critical, distant gazes, which hint at the film's ominous subject matter.

A representative for "Beasts Clawing at Straws" has emphasized that the characters run into each other by happenstance over a tussle over a bag filled with money, and that none of them particularly trust each other. Themes of poverty are also expected to be addressed by the hard-boiled crime thriller, as each of its characters see the bag of money as their last chance and will stop at nothing to get a hold of it.