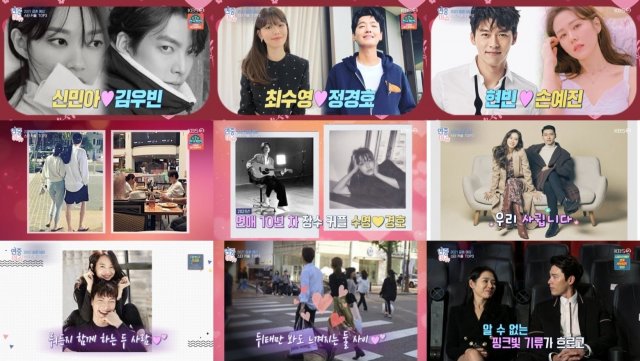 A recent episode of the KBS variety show YJ Live focused on a subject of intense curiousity among fans this year. Various South Korean celebrities are in high profile relationships but there has not been a high profile wedding as of late between two such stars. While COVID-19 has done much to inhibit any such celebrations, speculation is rampant about which couple may or may not take the next step in thei relationship, and YJ Live was bold enough to single out three such couples in order of likelihood.

The third most likely was Kim Woo-bin and Shin Min-a. The two were confirmed to be dating in May of 2015, despite a five year age gap between the couple. But they soon had worse problems, as Kim Woo-bin was diagnosed with nasopharyngeal carcinoma and forced to retire from active work. Nevertheless, the couple stayed together through all this time. When Kim Woo-bin started working again he did so through Shin Min-a's agency, suggesting she has a strong influence on him.

For that same reason the recently announced couple of Hyun Bin and Son Ye-jin placed highest on the YJ Live tabulation. Both actors are thirty-eight. Though they have only been confirmed to have been dating for nine months following the end of "Crash Landing on You" they first met in the feature film "The Negotiation" and rumors of a secret love affair dogged the two since they were seen in public together after filming was complete. The two have been quiet, though, since their New Year's declaration.