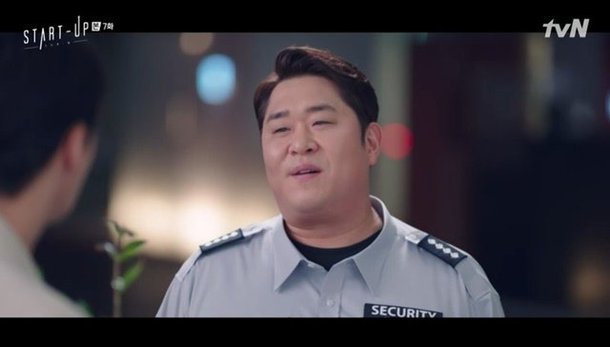 On the November 7th episode of "Start Up" comedian Moon Se-yoon made a surprise appearance as a police officer. His appearance follows an emotional scene where the character played by Kim Seon-ho angrily throws away a flower pot he had received as a gift. Moon Se-yoon then appears later on, with CCTV footage of the incident, and demands that Kim Seon-ho's character acknowledge his culpability for the act.

Kim Seon-ho's character attempts to explain the situation by claiming he was recycling the flowerpot. However, Moon Se-yoon explains that the law for recycling flower pots requires that the plants themselves be separated into general disposal. He goes on to explain that the dirt added to similar dirt on the ground, and for the shards of the pot to be put in non flammable recycling, to the bewilderment of Kim Seon-ho's character.

Moon Se-yoon's then claims to have been dealing with the matter over two days and one nights, a reference to a variety show the comedian is famous for appearing in. Kim Seon-ho is also currently appearing in Two Days One Night, which is how Moon Se-yoon was tapped for this cameo appearance. Moon Se-yoon makes infrequent cameos on many dramas. He also appeared in "Kkondae Intern" earlier this year.