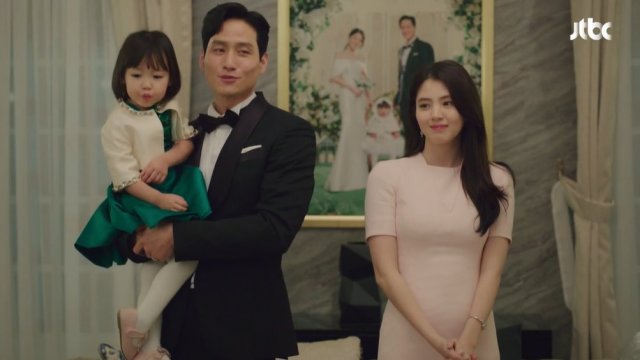 Recently fans have been critical of "The World of the Married" for casting a child (Lee Ro-eun) that is obviously far older than two years old to play a character on the drama that is explicitly stated to be under two years old. Since the controversy erupted, the mother of the child's Instagram account was found, wherein she expressed disappointed feelings over the reaction.

The mother recognized even in the context of her own post that the negative reaction was obviously not being placed on her daughter or herself, but rather at the casting director. All the same time, seeing the negative reaction to the role hurt the woman deeply, as she had already been anticipating her daughter's appearance in the drama with mixed feelings of hope and nervousness.

All the same, the mother of the child actress has requested that particularly cruel and offensive online comments on the matter be deleted. She has also thanked those who have offered support to the family in this situation. By all accounts the child actress in question has been excellent on set, without crying around many unfamiliar people and also showing great effort to stay still and quiet.

It is not known why such an old actress was procured when the script explicitly called for a younger one. It is also unclear why the timeskip was only for two years when four years would have been far more defensible. It's possible that there was some practical reason why an appropriately aged actress could not be located, but screenwriter Joo Hyeon-I was unwilling to change the length of the timeskip accordingly, as it would require altering other aspects of the script as well.

"[HanCinema's News] Mother of Child Actress From "The World of the Married" Hurt Over Casting Controversy"
by HanCinema is licensed under a Creative Commons Attribution-Share Alike 3.0 Unported License.