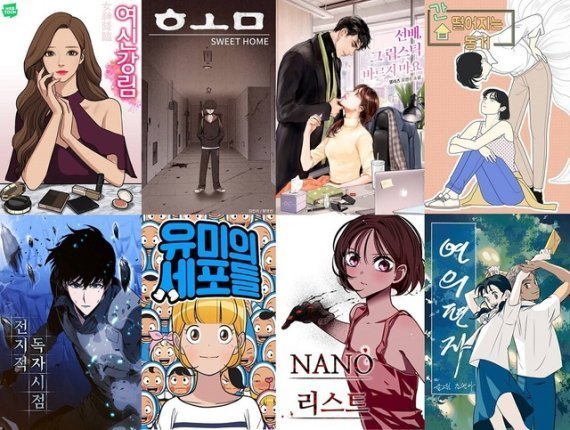 On December 28th Naver Webtoons published an official plan of their current strategy when it comes to adapting works hosted on the comics service to other platforms. Many of these works are already known and airing, or soon to be. "True Beauty" is currently appearing on tvN while "Sweet Home" recently made its premiere on Netflix.

"She Would Never Know" is coming out on jTBC on January 18th. The romance deals with an older professional woman and a younger professional man in an office environment. "My Roommate Is a Gumiho" will also come out next year. The adaptation of the webtoon of the same name will feature Jang Ki-yong and Hyeri in the leading roles as a gumiho and a normal college student forced together by circumstance.

Far more projects than that coming down the pipeline, all with distinct concepts. "Hellbound" from "Peninsula" director Yeon Sang-ho and lead actor Yoo Ah-in will drop on Netflix next year. Yeon Sang-ho collaborated on the original webtoon with author Choi Kyu-sok. But Choi Kyu-sok has an even longer adaptational history than that, being responsible for the original comic on which "Awl" is based. Choi Kyu-sok is also screenwriting the drama version of "Hellbound".

Other expected film adaptations include "Omniscient Reader" which is based on the apocalyptic fantasy webnovel of the same name. It will be produced by Realies Pictures, which made "Along With the Gods: The Last 49 Days". "Brave Citizen" will also be made into a film. "Yumi's Cells", "Yeon's Letter", and "Nanolist" are also set to receive animated adaptations. And this is only an abbreviated list, with several other titles listed for possible drama adaptations.