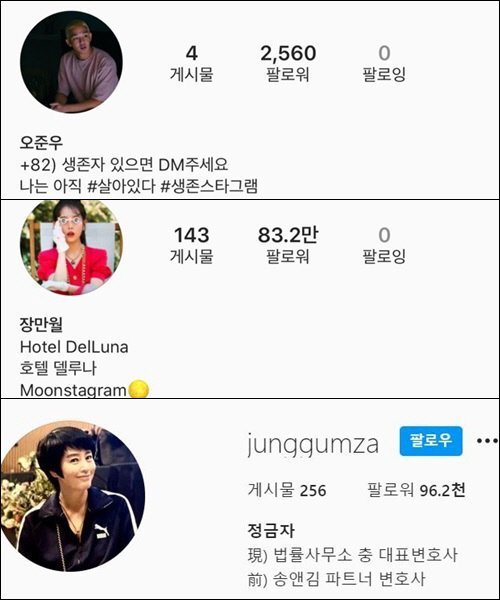 In the first noteworthy attempt at a viral marketing campaign for a South Korean film since the COVID-19 epidemic, the character played by Yoo Ah-in in the upcoming movie "#ALIVE" now has his own social media account. The account is written in character, with its apparent author imploring other survivors to send him a direct message if they are still alive.

The posts attached to the account all appear to be in character, though it is unclear whether the pictures are stills from the film itself, stills from deleted scenes, or were staged separately solely for the marketing campaign. In one picture Yoo Ah-in's character states that he's new to social media, having only gamed before. Another mentions him opening the door only to suddenly find someone trying to bite him. All the posts have hashtags and also feature Yoo Ah-in's belabored expressions.

This particular brand of viral marketing is not new. "Hotel Del Luna" had a noteworthy example last year with its lead character, played by IU, being the apparent subject. However, in this case the account was run by IU directly and was intended to be a consistent source of behind-the-scenes photos for "Hotel Del Luna". Her providing commentary regarding the pictures was done in character, and charming, but strictly metatextual.

Moon Ga-young of "Find Me in Your Memory" had a closer idea of the "#ALIVE" concept, with posts being made in character as the power celebrity she played on the drama. The idea worked in part as an acting exercise. Kim Hye-soo of "Hyena" also did this, and has since tried to transition her account into a personal one based on her actual identity.

It is unknown whether Yoo Ah-in is writing the posts on the account himself or if it is being done by the marketing team. "#ALIVE" has, after all, finished filming and he has no more need for acting exercises. But it would be one way for the actor to spend his free time, trapped as he is indoors. Albeit in this case by the real-life COVID-19, rather than a zombie plague.