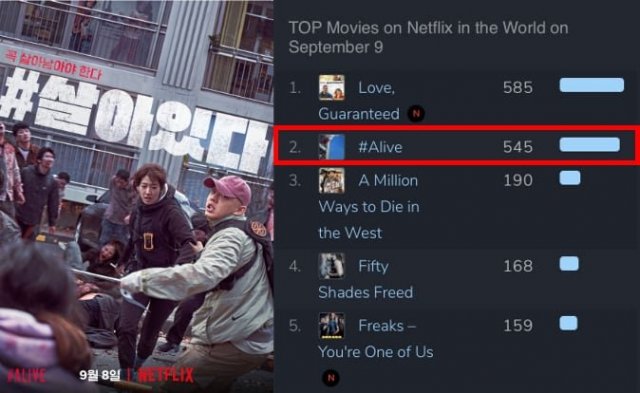 The South Korean zombie movie "#ALIVE" had a powerful opening on Netflix, surging to second place on the streaming platform's worldwide charts on September 9th following its release on September 8th. "#ALIVE" achieved this thanks to strong number one openings across much of Asia, as well as number two openings across much of the North American market. "#ALIVE" had nineteen number ones rankings across various ranking countries and over forty in the top three.

"#ALIVE" had a large number of factors going for it to making this strong performance possible. The popularity of South Korean movies such as "Parasite" and popular South Korean zombie media such as "Kingdom" gave the movie an obvious in-built appeal. Additionally, marketing across Netflix emphasized that "#ALIVE" was a Netflix exclusive beyond South Korea itself, and the movie was credited with breaking the COVID-19 induced box office slump in the South Korean market.