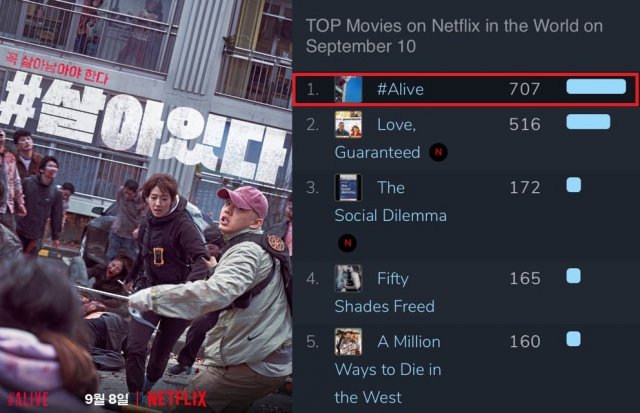 In its third day of full availability on Netflix worldwide, the South Korean zombie movie "#ALIVE" has now risen to the most popular movie available on the platform. The new data comes courtesy of FlixPatrol, which had already noted that "#ALIVE" was the number two worldwide movie on Netflix on September 9th a day after its release. The new September 10th figures show that the movie is continuing to benefit from positive buzz.

Aesthetically the movie's broad appeal is easy to explain. The main characters of "#ALIVE" are trapped inside their apartments due to a zombie apocalypse, mirroring the situation many people find themselves in real-life in this age of COVID-19. But "#ALIVE" has also benefited from strong marketing. Outside of South Korea it was marketed as a Netflix Original, with a wide variety of available subtitle and even vocal tracks.

Such success was also prefaced by the popularity of "Kingdom", another piece of South Korean zombie media, albeit in drama form. Notably, "Kingdom - Season 2" was unable to break into the number one worldwide spot for dramas. "Time to Hunt", a South Korean movie deliberately developed with an eye for Netflix, also never ranked this high. Earlier this year "#ALIVE" broke the film industry's COVID-19 induced slump, a move that's also believed to have bolstered the movie's reputation.