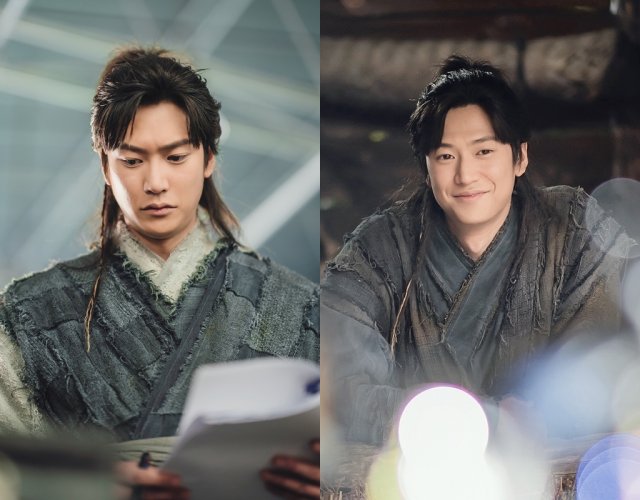 The production company behind "River Where the Moon Rises" has released new images of actor Na In-woo, in costume and reading his script in preparation for his leading role. The pictures are quite a bit more recent than behind-the-scenes stills usually are, as Na In-woo was only cast for the role a few days ago. Na In-woo's emergence as the drama's leading man came about only because the former lead actor Ji Soo was forced out of the production due to bullying he committed as a student.

Na In-woo has quickly overwhelmed Ji Soo as the topic of conversation regarding the drama. While Na In-woo already had his fair share of fans from his breakout appearance in "Mr. Queen" earlier this year none of them were expecting to see him again in a new role so quickly. Na In-woo has even outdone himself in terms of the production, with "River Where the Moon Rises" being able to expedite Na In-woo's appearance in the drama thanks to his quick work ethic.

Purportedly Na In-woo has a bright personality and has brought much energy to the shooting, serving as a badly needed booster in morale for a production that had been almost completed all filming before the Ji Soo controversy forced most of his scenes to be reshot. Supposedly Na In-woo's natural personality is similar to that of Ondal, the character he plays, brimming with enthusiasm and determination. "River Where the Moon Rises" had ratings of 8.3% on March 9th.