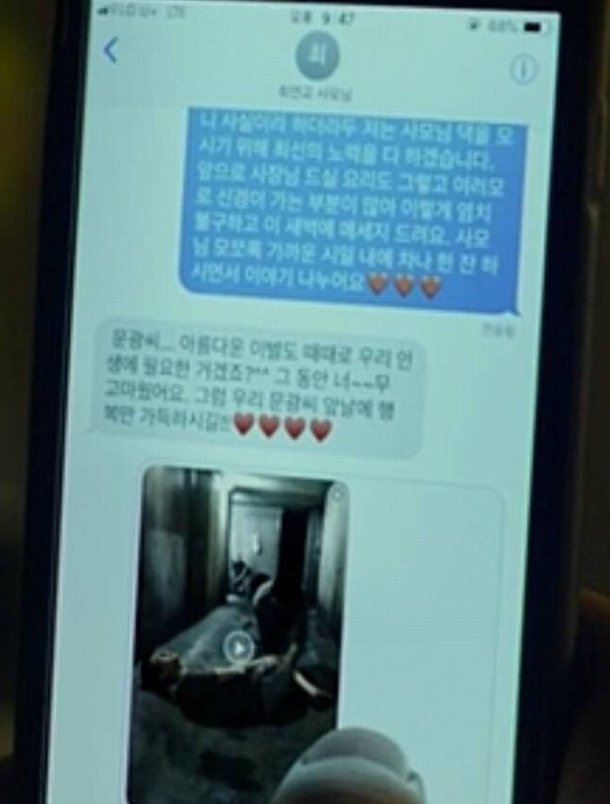 Director Bong Joon-ho has long had a reputation for focusing on minor easy-to-miss details. "Parasite" is filled with such details, but one involving a cell phone has only recently come to attention, in part because in context the picture quality is so blurred as to be nearly illegible. Naturally, spoilers are involved.

The screencap in question comes from the scene where the former housekeeper, played by Lee Jung-eun, is threatening the interlopers who have taken her job and others' in a wealthy household. Her threat involves sending a video text to the lady of the house, Cho Yeo-jeong, exposing their skulduggery. In pursuit of this end, Lee Jung-eun is brandishing her phone and the text on it is briefly visible.

As it happens, the phone is not just a casual prop, but is fully in character. It features a message from Lee Jung-eun's character asking the mistress of the house for one last meeting over tea to discuss some outstanding issues, which Cho Yeo-jeong's character cheerfully rebuffs. The incriminating video lies underneath these in-character texts, ready to be sent.

The surprising detail to character was met with strong approval on South Korea's Internet. Many commenters observed how the plaintive style of the housekeeper's texts and the chilly curtness of the lady of the house perfectly match their characters in a way that was not expressed via dialog. The usage of hearts by both characters to try and mask their obvious intent was, similarly, lauded as strong attention to detail.