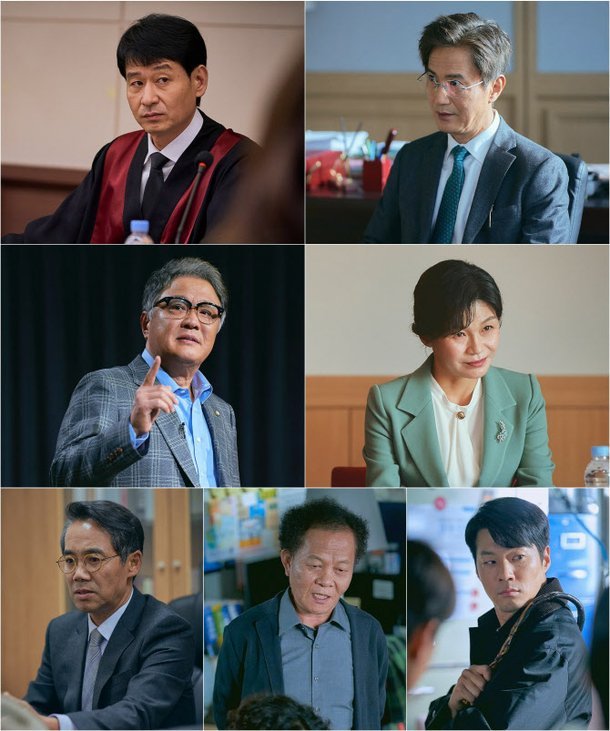 New stills released by "Law School" have confirmed several familiar actors in supporting roles for the upcoming jTBC legal drama. First is Park Hyuk-kwon. He will be playing the role of Jin Hyeong-woo, a detective who's investigating a mysterious event on campus. His presence is expected to be intimidating, with Jin Hyeong-woo hounding the lead character Jong-hoon, played by Kim Myung-min, over what he knows regarding the event in question.

In the same general plotline Ahn Nae-sang will play Seo Byeong-joo, a senior professor at the same school where Jong-hoon works, and a respected colleague whose legal experience was as a prosecutor. This character too, will be involved with the mysterious event as well as the ensuing sinister investigation. Jung Won-joong will played the dealmaking assemblyman Go Hyeong-soo. His presence will also be in a generally antagonistic light.

Gil Hae-yeon will play Oh Jeong-hee, a more positive character who is attempting to rebuild the reputation of the titular law school in the wake of the investigation. Woo Hyun will play Seong Dong-il, who is in charge of the school's copy center. Oh Man-seok-I will play Kang Joo-man, an excessively careful professor who's a tad clueless. Lastly, Lee Chun-hee will play Park Geun-tae, the lawyer representing the school's legal interests over the course of the investigation.

Many details remain unknown about "Law School" which is set to begin airing on April 14th. However, the new character descriptions make it clear that the plot will center around some sort of criminal incident. The relative age of the newly confirmed actors also suggests quite a bit of focus on the school itself and its adult caretakers, and not exclusively a story about the students who attend the school in question.