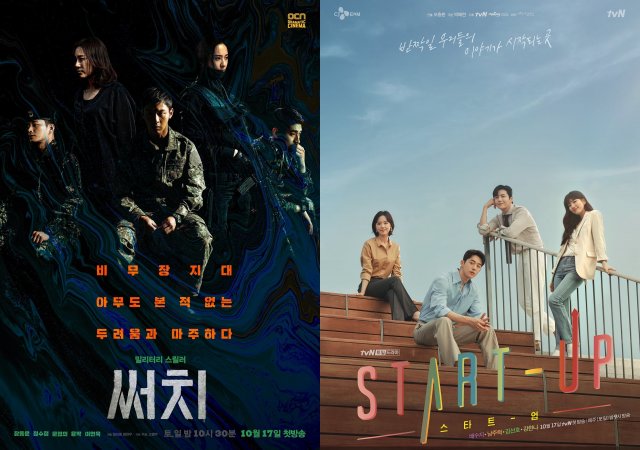 The past weekend saw the premiere of two new, very different dramas. "Start Up", starring Bae Suzy and Nam Joo-hyuk, opened up on tvN with ratings of 4.5%. "Start Up" deals with characters attempting to open up a new startup business and is a social drama. Meanwhile, "Search" opened up with ratings of 2.6% on OCN. "Search" deals with a professional military search team, and is focused on action thriller elements.

Both dramas are noteworthy for having offbeat premises that nevertheless fit fairly intuitively within the brand of their networks. "Start Up" has attractive younger stars but the focus is more on their ambitions than their romance. And in contrast to the traditional workplace environments common in South Korean dramas, the entrepreneurial vibe of "Start Up" is intended to invoke the wonder of Silicon Valley.

"Search", on the other end, is an investigative drama as is common for OCN. But the network has not typically held soldiers as its protagonists. There's also a deliberate political undercurrent in how the overriding incident takes place in the Demilitarized Zone on the border with North Korea.

"Start Up" and "Search" still have a long way to go to establishing themselves beyond the intrigue prompted by their unusual storylines. Both started out behind most of the currently airing weekend dramas. "Alice" had ratings of 8.6% in its most recent episode, while "Lies of Lies" had 5.8%.