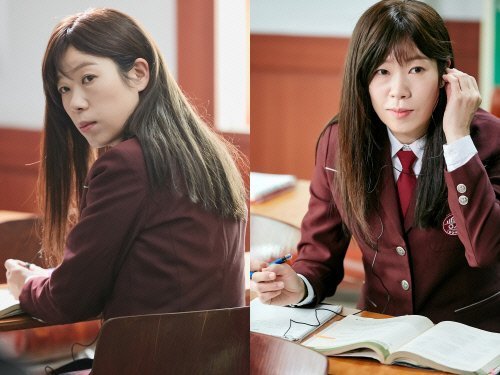 "When the Camellia Blooms" has released new stills for supporting actress Yum Hye-ran. Though Yum Hye-ran is forty three years old the stills somewhat surprisingly depict her wearing a school uniform. The scene being referenced is a flashback depicting the past encounters of present day encounters.

Dramas frequently walk a fine line when it comes to such scenes. Casting younger actors can be distracting unless the flashbacks are prolonged and important, but the older actors can look at times ridiculous in such costumes. "When the Camellia Blooms" appears to be taking the discordance to its advantage - enhancing the comedy of the scene through the obvious visual mismatch.

It's also an opportunity for Yum Hye-ran to show off her forceful charisma. Her character has gained popularity among viewers for her sharp tongue and assertive attitude. Having Yum Hye-ran continue to play that same role even in her teenage just goes further to emphasize how that's always been her personality, even in more theoretically romantic moments.