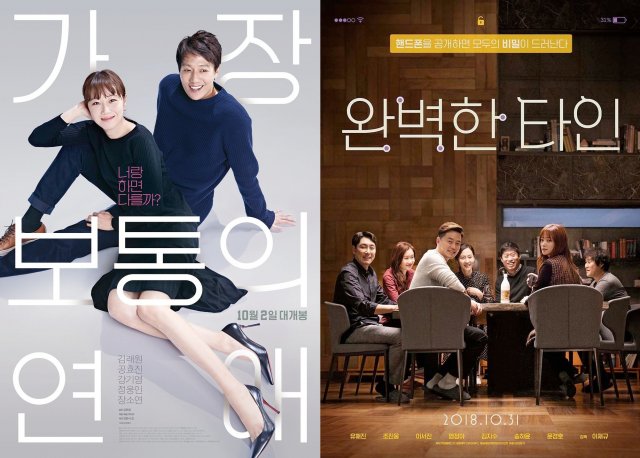 With "Crazy Romance" passing the two million viewer mark over the weekend comparisons have been made with last year's "Intimate Strangers", another comedy with a strong concept and well-known actors, but modest box office expectations. The movies have been tracking similarly, each having made the two million viewer benchmark at about the same time in their theatrical runs, after the second weekend.

A modern approach to relationships appears to be central to either movie's success. "Intimate Strangers" featured four couples in established relationships, with their dinner party being built around a game of fully shared cell phones. Consequently, the movie delves quite a bit into the extremely personal nature in which smart phones are used, to obvious comedic effect.

"Crazy Romance" does something similar, albeit in a different context. The relationship between the leads played by Kim Rae-won and Gong Hyo-jin is progressed in large part by their phones, which are frequently used by one or other as a demand for attention or prelude to drinking. Again to humorous effect, the movie deals heavily in ambiguous context that can only be fully unveiled when the two meet in person.

In any case, "Intimate Strangers" and "Crazy Romance" have shown how October, generally thought of as a weak time for the South Korean box office, can still have strong performing films if one shows up that pops the right chord with the audience. The success of "Crazy Romance" is also yet another argument for the strength of South Korean comedies, as is "Man of Men", another domestic comedy that tipped over a million admissions over the weekend.

"[HanCinema's News] October Showing Potential as a Month for Comedy Films"
by HanCinema is licensed under a Creative Commons Attribution-Share Alike 3.0 Unported License.