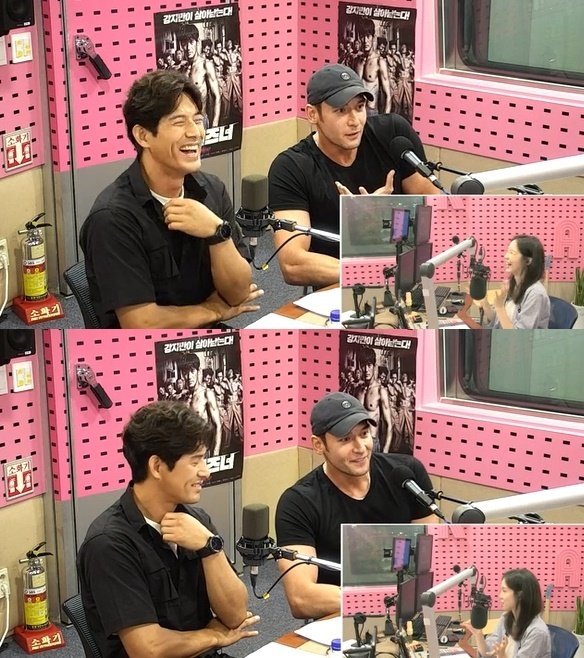 On the latest episode of the SBS Radio program 'Cinetown' actors Oh Ji-ho and Julien Kang appeared as guests. They were there to promote the upcoming movie "The Prisoner", an action movie about a detective who goes undercover at a prison fight club. The movie opens in theaters on July 23rd though it is expected to recoup most of its budget from the secondary distribution market.

The two talked a lot about filming for the movie's action scenes. A point was made about how Julien Kang's shoulder attack which appears in the movie was no joke. According to Julien Kang, he acquired a complex during his modeling career about his shoulders, becoming terrified they would become smaller. Julien Kang has posted instructions on his YouTube channel as to how he maintains their massive imposing bulk.

As it happens Julien Kang's YouTube channel also contains many videos of Julien Kang eating. Julien Kang explained that he has a very high capacity for eating, to as many as portions enough for eight people, citing his love for his mother's cooking as the impetus for this hobby. Likewise, Julien Kang took up extreme exercising in part to justify his voracious diet. Oh Ji-ho also chimed in to say that he had seen Julien Kang eat enough food for ten people firsthand.

Oh Ji-ho did not have the luxury of being able to eat so much during production, however, as his detective character required a leaner frame. This required extreme dietary restrictions, in addition to all the training Oh Ji-ho already had to do at the action school for the action scenes. Oh Ji-ho also discussed his daughter, who appears on his Instagram, describing her strong interest in physical activities like ballet and horseriding.

The director of "The Prisoner", Yang Kil-yong, also came up. Yang Kil-yong is a long-time veteran action choreographer, having worked with movies from "The Host" to "The Negotiation", but "The Prisoner" is his first outing as a director. Both actors stated that his training regiments were intense, on the level that may be expected of of professional fighters. Oh Ji-ho expressed hope that the movie could be an example to men of how their bodies can be sculpted even into their forties.

"[HanCinema's News] Oh Ji-ho and Julien Kang Talk About "The Prisoner""
by HanCinema is licensed under a Creative Commons Attribution-Share Alike 3.0 Unported License.