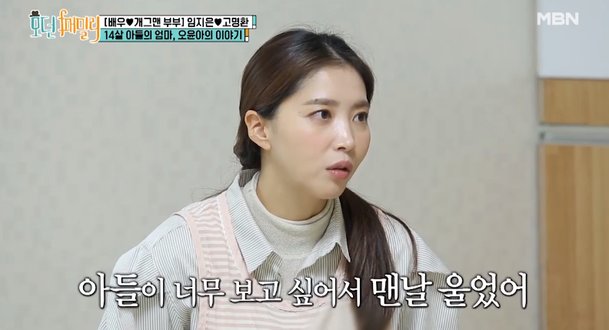 In a recent interview on the MBN variety show 'Modern Family' actress Oh Yoon-ah opened up about being a single mother. The divorced actress talked about having a son at the age of twenty-six and thinking he was very pretty. This was before Oh Yoon-ah's life was complicated by her divorce.

Oh Yoon-ah mentioned having no free time to speak of until her son was three years old. In between housework, acting, and her child, Oh Yoon-ah was simply too busy. Oh Yoon-ah also discussed taking up exercising just so she could better keep up with her now thirteen-year old son.

Oh Yoon-ah also discussed the importance of a vacation she took with her then-sixth grade son to Singapore. It was the first time since her debut as an actress that Oh Yoon-ah had allowed herself to take an extended break. At the time Oh Yoon-ah was worried about how the trip would go, but was heartened to find that her son referred to her as mother for the very first time.

This is remarkable, because Oh Yoon-ah's son is autistic. Oh Yoon-ah has been very open about this aspect of her life on social media. Oh Yoon-ah started her career as a racing model, but made her debut as an actress in 2004 with "Into the Storm". Oh Yoon-ah has since graduated into being a reliable supporting actress for many dramas with her latest project, "I've Been There Once", premiering next month.

"[HanCinema's News] Oh Yoon-ah Talks About Being a Single Mother to An Autistic Son"
by HanCinema is licensed under a Creative Commons Attribution-Share Alike 3.0 Unported License.